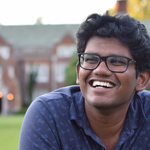 I lived on a Farm

Figuring out what comes after college

This is my reflection and post about my Alternative Spring Break (ASB) trip. It was sponsored by the UT Dallas Student Volunteerism Office and I am in Elm Mott, TX for the week.

I was placed in the Sustainability group and was there to learn about alleviating World Hunger. Here’s the org that housed us.

Make sure you read my first impressions before reading my reflection.

I was very worried about the living conditions, but I think it grows on you. I enjoyed bathing outside with the buckets of water we fetched. It makes you realize that bathing with a bucket is quite efficient to conserve water. I was not new to the game however, we do it all the time in India. I proudly took a bath every day.

The “squatty potty” was reminiscent of India as well. Except, here there was no water to flush, we had to use sawdust to continue the compost. It’s not as bad as it sounds. Surprisingly very clean.

Sleeping was not easy. Some nights it would get exceptionally cold. Our house had no electricity, and some people would forget to lock the door, allowing the wind to get in. I tossed, I turned, but I made it. Every night was unique. I was grateful for the one night we slept in the library because the temperature was dipping below freezing. By the end of the week, the temperatures went up. You get used to it slowly, that’s for sure.

We would wake up at 7AM every morning. Since there was no running water at our place, we had to go down the hill and brush at the outdoor faucet. I was really discouraged the first day because we had to brush our teeth outdoors when it was both raining and freezing outside. I got by though. Humming and whistling to pass the time away.

We did so much the entire week. We would wake up at 7 AM every morning and go to bed by 11 PM. No lights meant that the day ended as soon as the sun went down. The library and kitchen did have lights, however. Here’s a great picture of us all sleeping on the floor when we got a break in the afternoon:

The organization that hosted us was called the World Hunger Organization. Literally, two of our days were spent simulating hunger activities.

We took part in an interesting activity where the organizers gave us 13 pennies and we were supposed to run around and do chores to earn our breakfast. Each chore we did gave us some money. For example, I cleaned the windows on the farm, therefore, I received 5¢. Here was the pricing chart:

I really wanted a donut and a coffee, so I did a lot of chores. However, when I cashed in my money, Emily only gave me half a donut. I was pretty unhappy.

They refused to serve some people because it was a simulation of the inequality people face even though they work hard. The entire exercise was to demonstrate the divide in hunger.

Later that day, we repeated the same exercise, but on a larger scale across the entire farm. We did different chores to get the utensils and materials to prepare our own lunch.

Cooking on our farm

We had to cook outdoors on a rocket stove (which took 3 hours) and did everything outside. Some people in our group even slaughtered a chicken, such that we could earn it as food for the day. We ended up earning things like matches, rice, and beans to make a lunch/dinner for us. We threw it all into a pot and kept feeding the fire. It took forever, but we managed to make something edible. I learned about open flame stoves and starting fires. Keeping fires going is no easy task.

We reflected on the activity afterward. Honestly, I would have just eaten the raw vegetables. Cooking is such a hassle. Sad thing was that, even after 8 hours from breakfast, I wasn’t hungry. I think all those times I forgetting to eat lunch built some resistance against hunger.

Hunger is a problem. It isn’t a problem I am completely oblivious too. The lessons of the exercises weren’t new to me, but I did pick up some new skills. Reflecting back, I’m glad we learned what we did. It just goes to show how fortunate we are.

I met some great people while gardening, and I learned a lot of new things. This is where I picked up a lot of the skills this week.

We went out to two middle schools to look at different types of composting. These were middle school students, and we taught them various things. One thing we did was that we helped develop the community garden at a school by layering cardboard, leaves, coffee grind, and sawdust. In a couple months, that compost would turn into soil. The best thing is that you can do this in your backyard! Coffee grind is a waste product that you can get at your local coffee shop and the same with sawdust. I’m definetly going to get a compost going for our backyard.

Gardening on the Farm

The majority of our time however, we spent back at the farm and the vegetable garden. We tilled 100-foot rows of soil and planted tomatoes. We did this during different times of the day, sometimes 3 hours a time, rotating tasks.

I met an intern at the organization, and she was a 50-year lady, named Gala. Gala was a nurse from Florida and she’s been working on the farm to catch a break from her previous life. She taught me all about composting, and what I could do at home. She was a very good listener and happy to answer questions.

That’s when it struck me that the most important trait to have is the ability to patiently listen, one that everyone on the farm was very well-versed in.

She even taught me trellising a garden of the scale we were working in! This was cool because I’m going to use her method in our backyard garden.

Of course, we had to cook our own meals and do different chores around the farm. Sometimes, we had kitchen cleaning as a chore, so our entire group would work and clean up the kitchen. The thing about a farm is that everything is communal. We work together, and that is for the sake of all of us. That’s why I liked it so much.

We all cooked for each other, taking turns as head chefs and cleaning duty. My night was Taco Thursday, so I lead the initiative on that one. I was a little worried, but they turned out great. Frank & Stacy in our group made some amazing Chinese food on our first day.

Animal chores was something we also learned to do. These were things like feeding the pigs, collecting chicken eggs and tending to the rabbits. I’m no big fan of animals, but it was a learning experience. Feeding the pigs was a smelly job, but pigs gotta eat too.

I had a lot of fun. I wasn’t too happy about the living conditions, and that’s probably why I would stray from doing it again. I would only live there out of necessity, not desire.

However, every single minute I spent on the farm, I was focused on what I was doing. It was so isolated from everything else. Every breath of fresh air was worth it. Just calm and peaceful. Not bounded. Mind as free as the open skies.

And Yes. The sunset was beautiful.

Appreciating what we have

My exams, projects, and homework seemed meaningless compared to the physical work I was doing. The real draw was that I was literally going reap all my hard-work in the form of food later down the line. Also, I met my fitness goal every single day of the week!

As a computer science major, and I was still trying to understand why things around the farm couldn’t be automated. I slowly realized, that the barrier is not technology itself, it’s the spread of technology. No electricity on the farm and outdoor plumbing proved to be a barrier. Finding a power source is also just as hard.

I always have trouble appreciating my present because I’m too fixed on the future. However, my time on the farm - all those hours we spent talking to each other, and the time I spent just working the garden - I really appreciated what I was doing. Everything I learned had its purpose.

Did I mess up? Yes, I did. A lot of times. However, I wasn’t given a number and rated for my skill, I was nurtured and encouraged to keep trying. Farming is hard work. It teaches you to value yourself. It teaches us to value the world around us.

Why would I give up my time to live on a farm?

It taught me to experience the world from a different perspective. Look at it from the other side. One that is isolated. Nope, it’s not a convenient lifestyle. But I don’t want to settle for convenience. I don’t want to settle at all. I want to keep moving. Keep trying. Keep learning. Keep growing. I’m definitely going to visit again! However, next time I’ll be prepared. I’m aware of the problems and things I didn’t like, and I’ll be coming back with solutions. At the end of the day, I still do love solving problems.